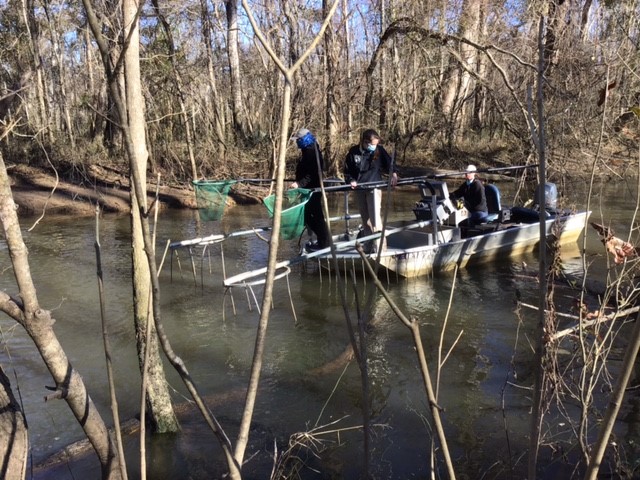 From the perspective of someone who enjoys fishing, it gives a total new meaning to “go fishing” with these folks who really love their work! Where I might go to catch a redfish, flounder, bass, or bream, they go to catch some of everything there!  And along the Apalachicola River there are all sorts of fish most of us would never imagine swimming around in that stream or slough.

Dave Werneke and Dan Akin collect fish mostly by seining with a net  they pull between them, wading in water that is usually  from ankle to waist deep. It gets interesting when it suddenly drops off to chest deep.  When they get close to the bank, they break into a manic dance as if being attacked by ants and trying to stomp them off their feet, but they are really trying to scare the small fish into the seine just before it’s lifted up in the air.  The catch is amazingly full of hundreds of small fish of many varieties. These fish are mostly small minnow to palm size. Dan is working on his doctoral degree, cataloging their numbers, size, and habitats in different locations. This is all in an area we plan to clear out to improve flow and hydrate the floodplain.  He will be able to tell us if we have improved or diminished the fish inhabiting the area through the restoration efforts. 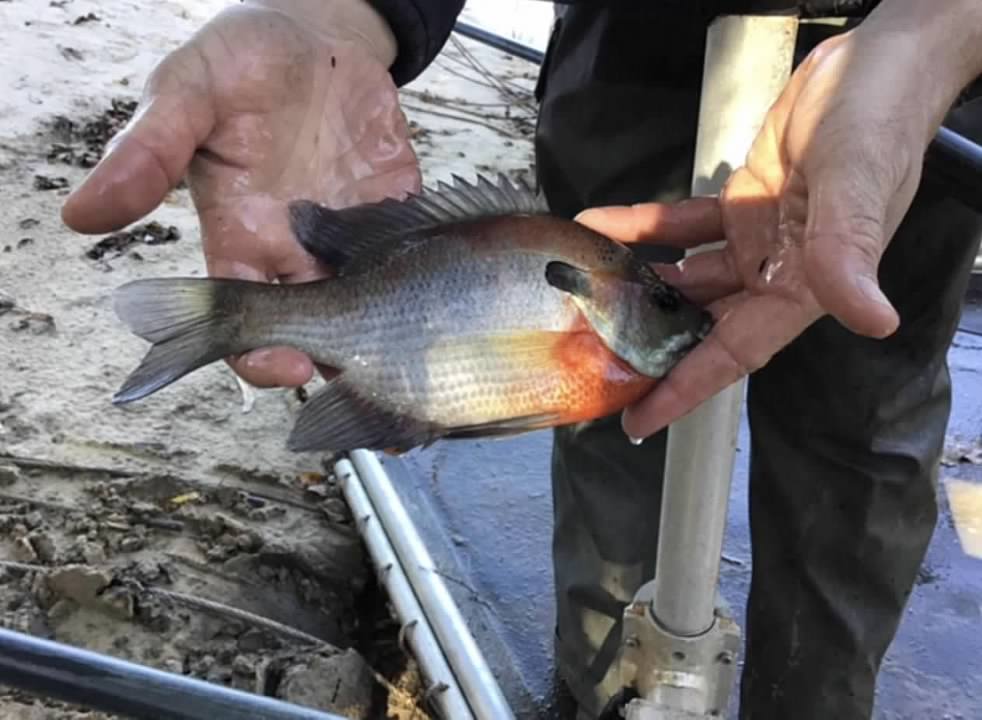 When Chelsea Myles-McBurney and Lauren Patterson show up with the FWC shock boat, the fishing gets really exciting.  Assisted by Calvin Beech, they run the anode droppers (on bow of boat) of the shock system into the shoreline habitats. Chelsea drives like an expert demolition derby car driver, pushing deep into the bank habitat to the point where you think all the dippers and rails of the boat are going to be crushed. Then she goes full reverse while Lauren on the bow applies the shock to temporarily stun the fish. The stunned fish float to the surface and get dipped up by Lauren and Calvin using lunges and backhanded scoops like Wimbledon tennis stars. They net the fish before putting them in the holding tank to be weighed, measured and tissue sampled before being returned to the water.  I’m sure these fish are never the same, not because they were shocked. Rather, Lauren and Calvin oohed and ahh’d over them, admiring the fish while taking pictures. Dan has so carefully taken their tissue for posterity and Dave has weighed and measured them. Maybe the fish feel like superstars?  The fish are then carefully released and swim away after an experience that has surely expanded their global awareness of their place in the world.

So next time you wade out across that flat or marsh or jump in the river, remember you have considerably more company than you might think.  And most of them won’t bite you.

Dan Tonsmeire is Construction Manager- Project Coordinator on the Slough Restoration Project. He served as Riverkeeper at Apalachicola Riverkeeper from 2004-2018. In his free time, he enjoys recreational fishing. 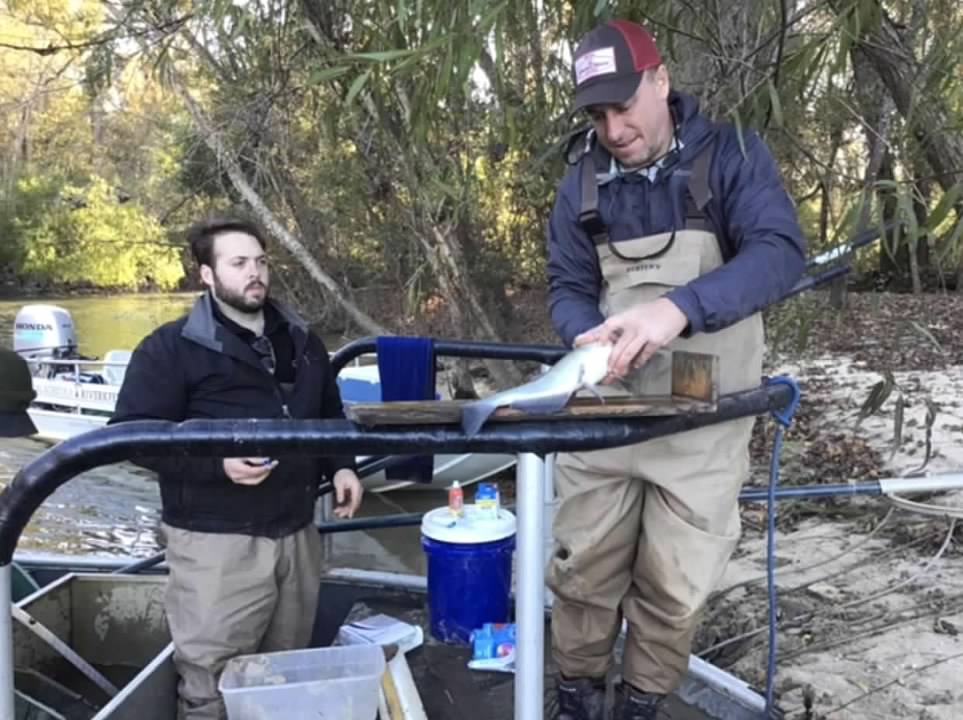 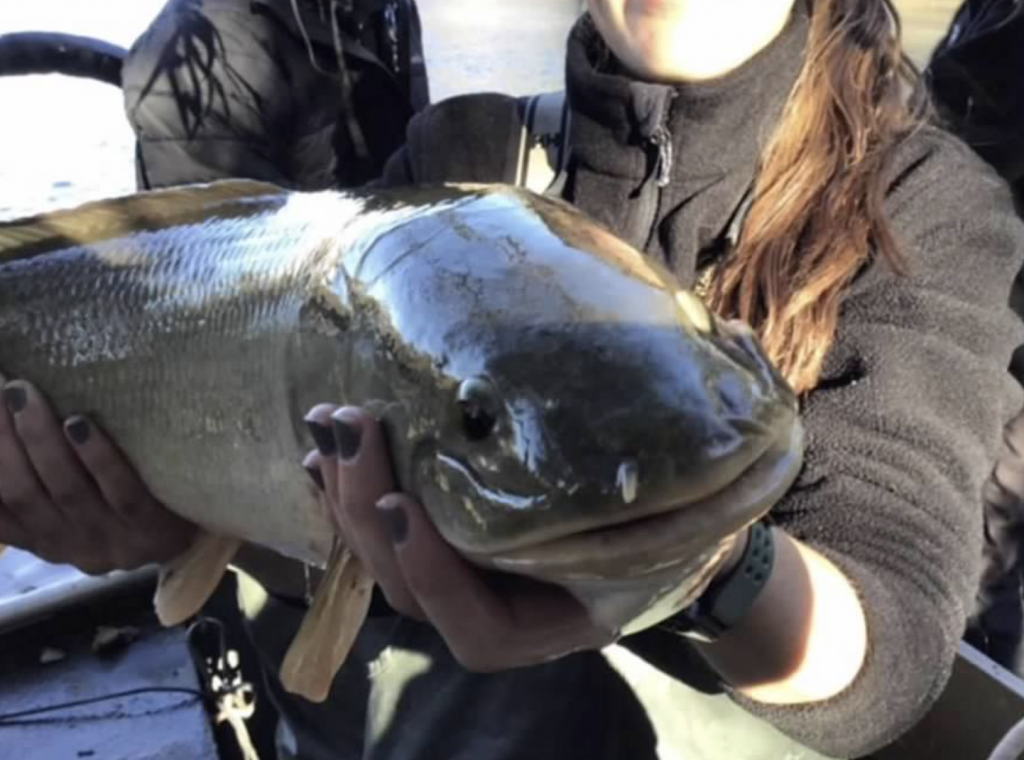