Bringing in the New Year Where Humans are Only Visitors

Participants in Apalachicola Riverkeeper’s first outing of 2021 kicked off the new year by hiking to Gap Point in St. George Island State Park. Initially slated for January 1, we had to delay the five-mile hike for two days due to heavy rains, but on Sunday, January 3, the clouds parted and the coastal scrub habitat that some have described as “desert like” felt alive and vibrant. The trail moves through mature slash pines that were once “cat-faced” with slanted cuts to collect sap to make into turpentine. There was also sand live oak, large rounded clumps of Florida rosemary, and yaupon holly sporting bright red berries.

A few puddles left from the rains caused some careful negotiating and one required the temporary removal of footwear to keep shoes dry. Southern leopard frogs called from nearby marshes—heavy winter rains can cause explosive breeding of this species—and birds drew our gazes skyward, especially to a large undulating flock of white pelicans. Gap Point itself marks the point where East Slough meets the much larger Apalachicola Bay. It was low tide and sand flats stretched out into the bay. Several pines were perched precariously along the shore, some with nearly all roots exposed from steady erosion caused by sea level rise. 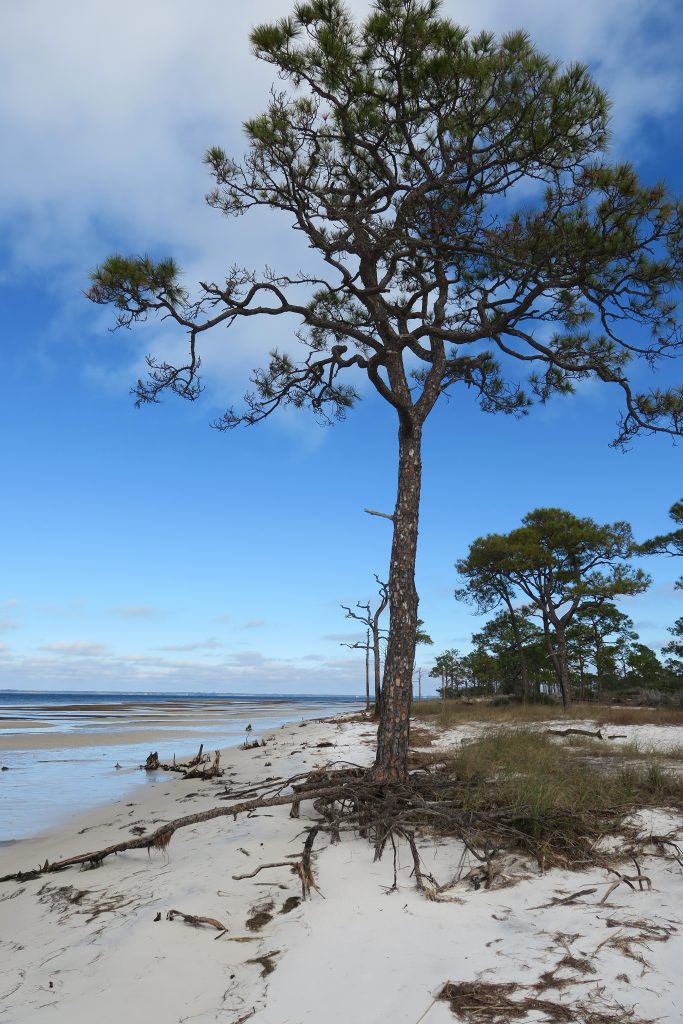 On the return trip, those of us in the rear of the group witnessed three adult bald eagles calling loudly and engaging in aerial combat while flying through treetops and expertly avoiding limbs. It was a “National Geographic” type moment and it passed too quickly to snap photos, but the images will remain imprinted in my mind. It is a reminder that nature moves on its own time frame and species other than our own are living their lives as they have for millennia. In protected lands such as St. George Island State Park, humans are visitors who can glimpse wildlife happenings such as the mating rituals of bald eagles, testifying to the importance of protecting vital ecological lands around the Apalachicola Basin.