To venture into the Apalachicola Lowlands with plant experts such as Guy Anglin is an experience worth savoring. Guy, a botanist/ecologist and member of Apalachicola Riverkeeper’s board of directors, recently organized a field trip with members of Apalachicola Riverkeeper and the Florida Native Plant Society. The site he chose to explore was in the Apalachicola National Forest just north of Sumatra in an area that had been prescribed burned last spring. Since it was the end of October, the open understory was awash in colorful native wildflowers and wispy grasses while mature longleaf pines cast patches of filtered shade.

“The Apalachicola Lowlands is a key area of biodiversity,” Guy said in his introduction. “Much of it has never had heavy equipment on it and the second growth longleaf forest is now approaching old growth. It also contributes pure water to the Apalachicola River.” He pointed to a nearby low area that formed Fields Branch, that fed into Kennedy Creek, that flowed into the main river.

We learned there is no more clearcutting of longleaf forests on the Apalachicola National Forest due to the presence of the endangered red-cockaded woodpecker, the only native woodpecker that creates a cavity in a living tree. Indeed, all around us were longleaf pines that had been painted with white rings, marking them as cavity trees for the woodpecker. The protections were largely the result of efforts by the Friends of Apalachicola National Forest, primarily made up of natural science experts in various fields, and a threatened legal challenge by the Sierra Club Legal Defense Fund in the 1980s. The forest’s longleaf forests are now on a 100-year rotation, managed primarily by thinning.

Walking through the forest with about 15 people, many of them plant experts, made for a fascinating outdoor classroom. Each plant deserved a pause for recognition. There was blazing star, runner oak, wiregrass, asters, partridge pea, switch cane, flat-topped goldenrod, deer tongue, elephant foot, dwarf wax myrtle, gallberry, dwarf pawpaw, yellow-eyed grass, hibiscus, button snakeroot, tickseed and native sages and mints. Latin names for the plants were rattled off as well, something that rarely stuck in my brain.

We also learned interesting backstories for some of the plants. For example, toothache grass was often used for toothaches because your mouth would go numb when you chewed on the roots. Scareweed, a threatened species in Florida, was named generations ago because it would dry up and break off and roll like a tumbleweed, sometimes scaring horses. Another highlight of the outing was in the treetops—a family of red-cockaded woodpeckers passed by, feeding in the longleaf branches. Some had been banded by biologists. It was a reward for moving slowly through the forest and being observant.

The outing helped us gain a better appreciation of an area of Apalachicola Lowlands that is considered in excellent condition—frequently burned with no history of heavy machinery—when other parts of the Apalachicola lowlands had previously been cleared, plowed and planted in slash pine, opening the way for thick strands of titi to move in.

If you want to visit this region of the forest, head north of Sumatra about 6 miles on Highway 379 and make a right on Forest Road 123. Soon, you will see open longleaf forests that fringe large grassy savannahs. Make sure to get out of your vehicle and explore on foot, being mindful that the ground can be soggy after a rain. 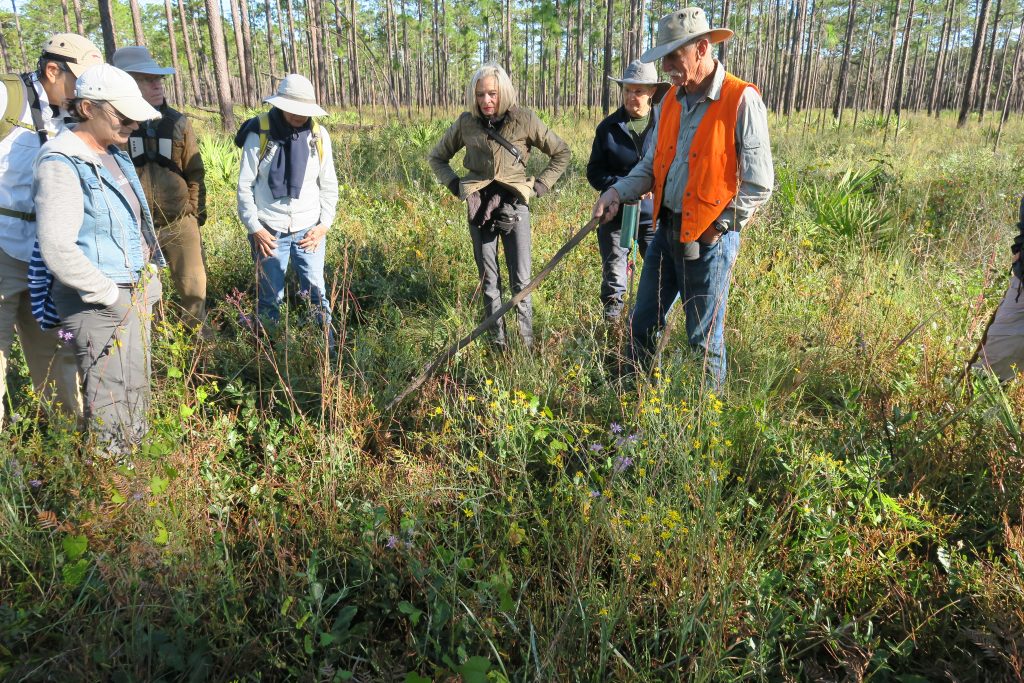